This post is the second section of the chapter, about 2-sample t-test and paired t.

To compare two growth hormones, 18 chicken were tested: 10 being assigned to hormone A and 8 to hormone B. The gains in weights (grams) over the period of experiment were measured.

We begin by calculating some descriptive statistics:

And now we draw a boxplot and a stripchart (in this case in vertical) of the data: 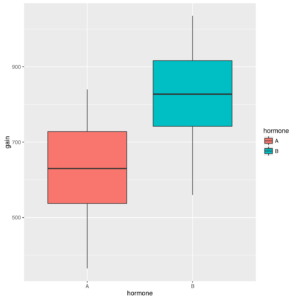 Box-and-whiskers plot of gain by hormone

Stripchart with connect line of gain by hormone

The geom_point() function and geom_line() functions add the red points of two group averages to second graph and then link them with a segment.
group_by() and summarise() functions applies separately the mean() function to values of gain corresponding to hormone variable levels. In this case, if the segment is near to parallel to the x-axis, then the two means are probably equal. Anyway, both graphs and statistics show that hormone B tends to generate heavier chickens. 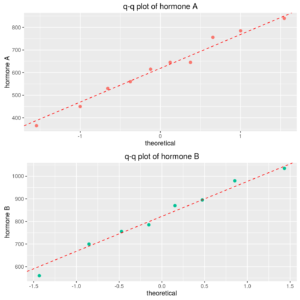 From graph, no evidence of non-normality is evident. Now let us perform Anderson-Darling’s test for gain in the two groups, exploiting the function tapply:

All three previous tests accept \(H_0\), i.e., there is no evidence to say that the variability changes across levels.

The \(t\)-test rejects the null hypothesis.

Now the same test may be conducted using a model approach.
The following lines of code perform the model fitting and print the main results.

Using summary the significancy of parameters is also shown:

Why these results? “Behind the scene”, the model has been built using the following **model matrix** (\(underline{X}\))

What this matrix means?

For modeling purposes, the independent variable hormone has been “split” in two dummy variables: hormoneA and hormoneB:

Obviously, when hormoneA is 0, hormoneB is 1 and vice versa. Then, one dummy variable (in this case, hormoneA), can be removed from the model, because it does not add any useful information, and makes the model mathematically non-manageable. Consequently, the model matrix will contains only the “all 1s” intercept column (that refers to the case when hormone A is used) and the “displacement” hormoneBcolumn which represents the constant added to mean growth when using hormone B instead of hormone A.

In other words, the model actually estimated is the following:

Where \(delta_B(hormone_i)\) represents the function that returns 1 only when the hormone of \(i\)-th unit is B, otherwise, returns 0.

Printing a summary method for analysis of variance objects reflects the different approach to what is essentially the same information as returned by lm(). While a printed linear-model object shows individual coefficients, printed aov objects show terms, which may correspond to several coefficients. However, methods for linear models can always be applied explicitly on aov objects, such as those for the coefficients or residuals.

Above output shows that hormone, with all its levels, is globally significant (p=0.012) in explaining the dependent variable variability.

In this case, since the independent variable (factor) contains two levels only, the resulting p-value for hormone obtained from aov is identical to the p-value of hormone B obtained using lm() (actually, in this example they are the same test).

Next lines of code show that actually aov objects are lm objects with also analysis of variance results added.

The following commands are useful to read/define the type of contrasts (i.e., the type of coding of regressors matrix \(underline{X}\)) used when unordered or ordered factors are used.

Next line of code shows that the hormoneB coefficient is simply the difference between average growths for hormoneA and hormoneB chickens.

R can use several types of contrasts: contr.treatment sets to zero the coefficient of first factor level, that becomes the intercept, and consequently all the means of other levels are relative to the first level. Another option is contr.sum, that sets to zero the sum of coefficients, and then the reference value of coefficients becomes the gran mean, calculated on all factor levels. R uses contr.treatment as default.

The aov() results are the same:

but, on the whole, the results are changed:

and then we will fit a model without intercept to data. In general, removing the intercept is a discouraged practice, but sometimes no intercept models can help to enhance coefficients meaning:

The model matrix can be useful to understand the meaning of the coefficients:

Next code shows what can happen when one uses a no-intercept model and does not address for that in analysis of variance:

anova() performs an analysis of variance to compare two nested models (see the paragraph on Comparing two nested models in Some Theory on Linear Models chapter).
In this case we are comparing a model with the group variable hormone against the model with grand mean only.
The result is the same as seen individually in lm() and aov() outputs.

Since the assumpions on linear models, the residuals should arise from a gaussian distribution; then, a Normal Probability Plot of residuals will be plotted to check this assumption. 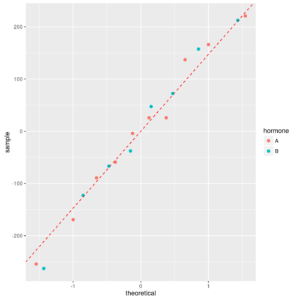 The Anderson-Darling (AD) test confirms that:

This confirms that the analysis and its results may be considered correct.

In an experiment to investigate if an optional equipment of cars may help to park the cars themselves, 20 drivers were asked to park the car with and without the equipment. The parking time (secs) for each driver and equipment is recorded. 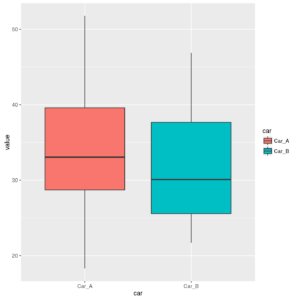 Box-and-whiskers plot of parking times for the two cars

A stripchart with mean points and mean line: 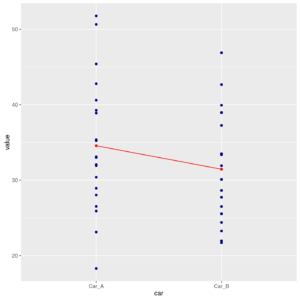 Stripchart with connect line of parking times for the two cars

Before testing the means, a check for normality is made by using qq-plot and Anderson-Darling test 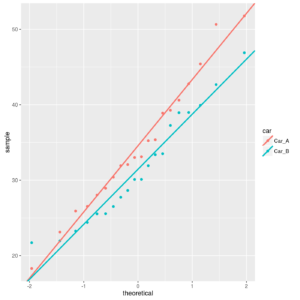 There is not evidence of non-normality within groups, and the AD tests confirm above results:

Following this result, the null hypothesis is not rejected (at a 5% level).

But if we produce a scatterplot of Car_A Vs Car_B,

we can see that data of two cars are clearly NOT independent!!
Measures on Car_A are strongly related to measures on Car_B, because each driver drove either cars.

Then the correct test for such as data is:

In either cases the results are the same: a difference statistically significant exists between mean parking times of two cars.

In this case the Normality test must be performed on differences between measures within same driver. 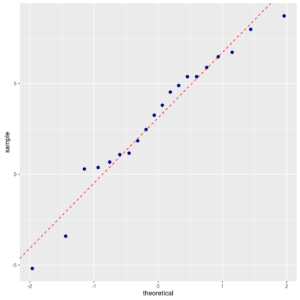 And the Anderson-Darling test:

For either tests, the Normality assumption is not rejected.

or, equivalently one may use also:

q-q plot (or Normal probability plot) of residuals shall be identical to previous one.

The Anderson-Darling test too is identical to previuosly made test:

Note that for repeated measures experiments, several analytical options are also available: for example through the Error() function in formula specification, or using mixed-model methods (lme4 or nlmepackages are the most used and known).
In this manual we won’t deep these arguments, because they would require a distinct section for each of them.