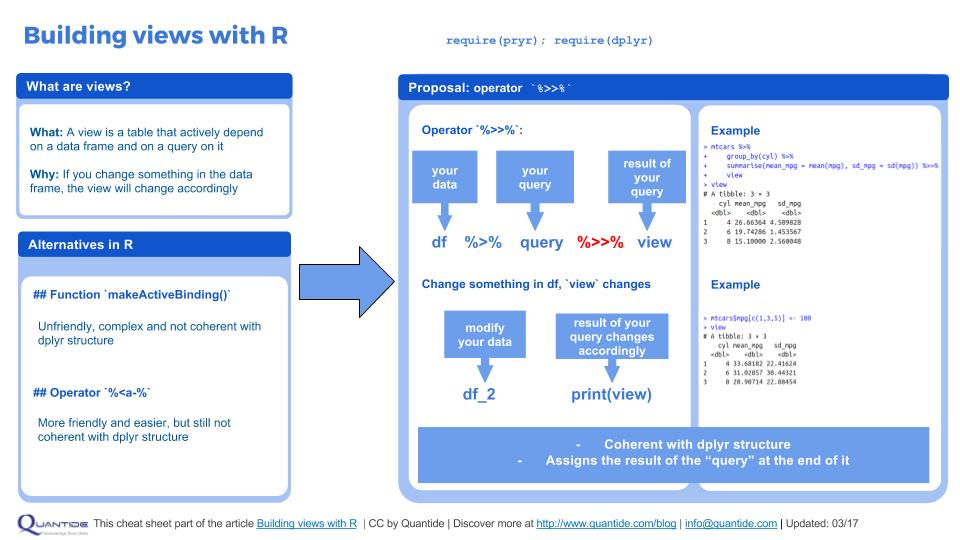 In database theory a query is a request for data or information from a database table or combination of tables.

Since dplyr we have something that quite closely conceptually resembles a query in R:

I particularly appreciate of dplyr the possibility of building my query as a step by step set of R statement that I can progressively test at each step.

Again in database theory, a view is the result set of a stored query on the data, which the database users can query just as they would in a table.

As far as I know, I can achieve this goal in three ways:

Function makeActiveBinding(sym, fun, env) installs a function in an environment env so that getting the value of sym calls fun with no arguments.

As a basic example I can actively bind a function that simulates a dice to an object named dice :

Similarly, I can wrap adplyr expression into a function:

and then actively bind it to a symbol:

so that, any time we call view the result of function f()is computed again:

As a result, if I change any value of mpg within mtcars, view is automatically updated:

Clearly, I have to admit that all of this looks quite unfriendly, at least to me.

A valid alternative, that wraps away the complexity of function makeActiveBinding() is provided by operator %<a-% from package pryr:

Again, if I change any value of mpg within mtcars, the value of view get automatically updated:

Note that in this case I have to enclose the whole expression within curly brackets.

Moreover, the final assignment: %<a-% goes on the left hand side of my chain of dplyr statements.

Finally I would like to propose a third alternative, still based on makeActiveBinding(), that I named %>>%

that can be used as:

And again, if I change the values of mpg: