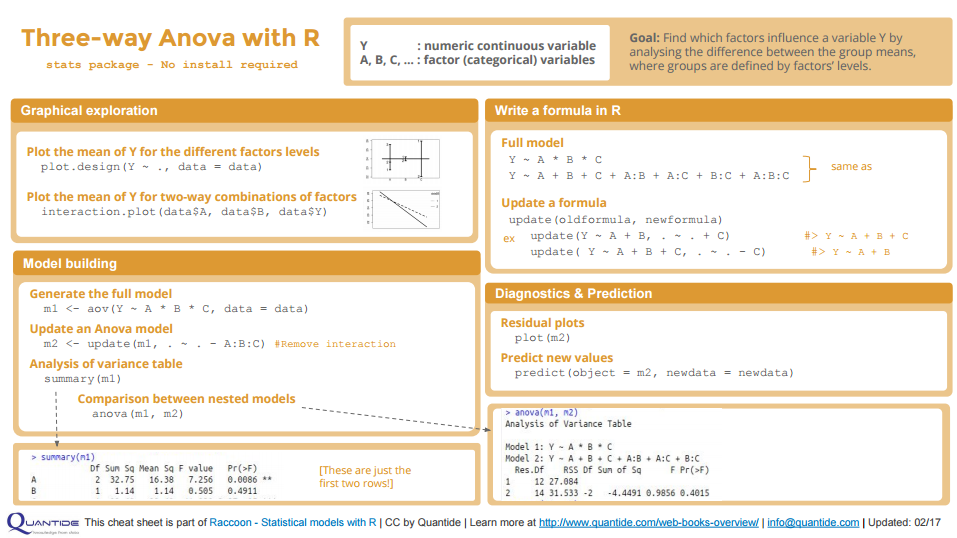 This post is the fourth section of the chapter, about 3-way Anova.

Distance data contain measurements of braking distances on the same car equipped with several configurations of:

For each combination of levels of the above three factors, 2 measurements of brake distance have been registered.

The objective of the experiment is to find which factor(s) influence the brake distance, and in which direction.

Let us first get a graphical insight of the data. We want to graphically explore how the average braking distance changes given specific levels of the factors considered. Thus we first plot the univariate effects. 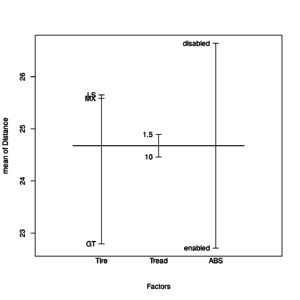 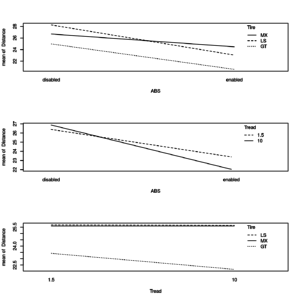 The braking distance seems to decrease when ABS is enabled as compared to ABS disabled independently of the tire type (no interaction). However, there may be an interaction between Tread and ABS, that means that ABS might affect the braking distance differently based on whether it is combined with a specific type of tire.

So far we have commented on plots based on descriptive statistics only. In order to say whether the differences between the several means plotted are significant or not, we need to insert these factors in a model and run tests on each factor/interaction included in the model.

Inference and models of 3-way Anova

Notice that this is equivalent to writing:

Only main effects ABS and Tire seem to influence the mean of the braking distance (similarly to what we had guessed by looking at the plots!). Interactions seem not significant, meaning that those differences we had noticed in the two-way interactions plots were too small to be statistically significant. We can now start to drop the interactions from the three-way interaction.

In general we are interested in finding the most provident model which better explains the variability in the data. Once the full model has been fitted, we start by dropping the highest-level interactions because we “move” within the hierarchical models paradigm.

To obtain the model without three-way interaction, we can use update():

Since two ways interactions seem to not affect the mean braking distance, we could now try to remove all two-way interactions, always using update() function:

The result is not surprising, as it is very similar to that found with the previous models. It is better to check if the three removed effects together are still not significant using anova():

The combined effect of the three-way interactions is not significant, thus we can continue on with the model with the main effects only.
The tables of effects from model follow below

And now the table of means from model

Finally, we remove the Tread effect to obtain the final model with significant effects only: 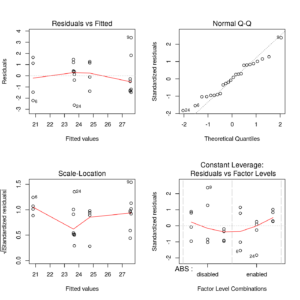 Since the leverages are constant (as is typically the case in a balanced aov situation) the 4th plot draws factor level combinations instead of the leverages for the x-axis. (Notice that the factor levels are ordered by mean fitted value)

Distance means for each ABS and Tire category follow:

While the table of grand means from model can be found as follows:

Last we can get some predicted values from ANOVA model:

Question: predicted values are different from the above calculated sampling averages. Why?