This post is the fifth section of the chapter, about unbalanced anova with one obs dropped and fixed effects nested anova. 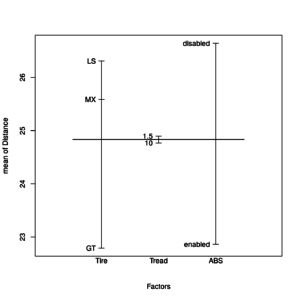 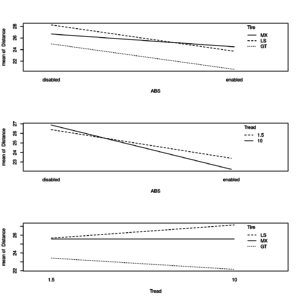 The final model is hence the same as the model in the previous example of balanced anova. However, notice that the sums of squares of the following two models (that we expect to be equal), are different:

Since aov() performs Type I SS ANOVA (see Types of Sum of Squares in the Appendices) and this example uses data from unbalanced design, the previous 2 models give different results in terms of SS and respective p-values. Hence  fm is calculated based on SS(ABS) and SS(Tire | ABS), whereas fminv is built  SS(Tire) and SS(ABS | Tire).

In order to get Type II ANOVA SSs and p-values, one can consider SS(Tire | ABS) and SS(ABS | Tire).
Otherwise, drop1() function can also be used. 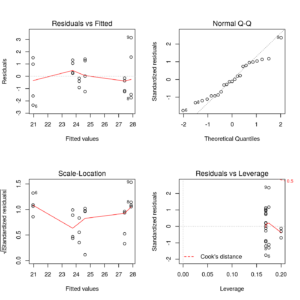 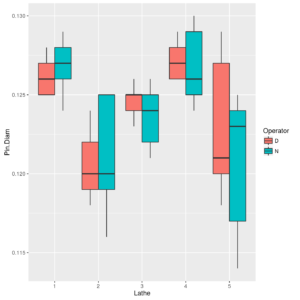 The / formula operator means that the levels of Operator factor are nested within the levels of Lathe factor. If we read the output we find that lathes seem to produce on average different products, whereas the difference between the means of the pins’ diameter conditional on the operator does not seem to be significant. Although the final results of the two anovas (the first of which is incorrect and the second one correct!) may seem similar nested anova is the one to use because there is a control over the variability given by the (fixed) effect of the operators. Nested anova is hence useful for reducing the general variability of the plan and getting more significant differences among the levels of the factors. 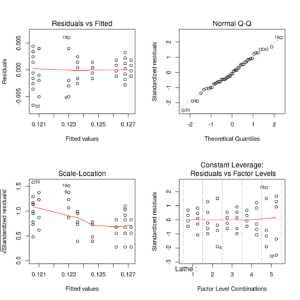